It was a rare evening, peering upward at the lunar eclipse of a super “blood” moon, blackened like night by the shadow of the Earth. It won’t happen again for 18 more years, which is 9,460,800 minutes away 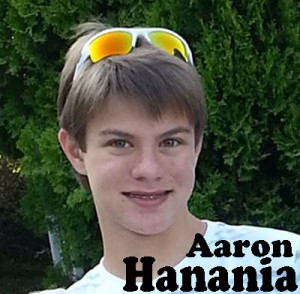 On September 27th 2015 a very rare event took place, and I was lucky enough to be in the right place at the right time. The moon, which was already a super moon, was totally eclipsed by the shadow of the Earth. The last time that a total lunar eclipse of a super moon took lace was in 1982 over 3 decades ago.

And the next time that a total lunar eclipse of a super moon will happen is 2033, in 18 years. So please don’t go outside every night and wait for another total lunar eclipse of a blood moon because you will be standing outside for a very long time. You would have to wait 157,680 hours or even worse, 9,460,800  minutes that could be spent doing things to benefit you!

All day Sunday, it was very cloudy in Chicago. That was until about 8 pm. Luckily,t he clouds parted in Orland Park just long enough for us to see the eclipse. Unfortunately so many other people and even you may not have seen the eclipse. Click here to see the Video I filmed of the time lapse of the whole eclipse for you to see. It is played at 8 times speed, saving you lots of time.

At about 8:10 the moon was slowly being eaten by earth’s shadow. It seemed that the moon was being emptied of its light like an hourglasses’ sand. An eclipse happens when the moon goes behind the earth and gets covered by earth’s shadow. A super moon happens when the moon is closest to earth on its orbital path. Both of these events are pretty uncommon. When both of these happened at the same time. 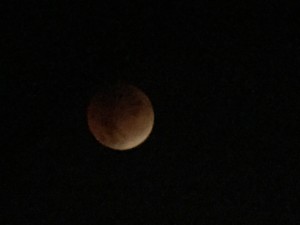 To give you a visual if you are a visual person like me, take for example being struck by lightning.

The moon looked like it was slowly being eated by something like a dark mass. The shadow slowly consumed the whole moon from the left side to the right side. As you can see in my time lapse video the eclipse lasted a good one and a half hours. My video is only 5 minutes because I edited out a lot of shaky video and played it at 8x speed. The coolest thing is that at 0:48 second mark the plane in the thumbnail photo flies right through the moon!

The hardest thing was filming the eclipse and oddly seeing it through my telescope. Since the moon raises in the east, I had to try to prevent the trees from blocking my camera. As it slowly moved southeast, it became easier because it eventually moved above the trees in my yard.  I literally had my tripod with the camera on a glass table  and I was standing on a bucket just so I can get the million dollar video.

You would think that telescopes would be made to block out the bright light from the moon. Wrong! It is almost blinding to look at the moon with my telescope. The only time I can clearly see the moon is when I have a dark border and part of the moon in the same frame. If it is not then I literally see nothing but white light. Looking at the eclipse was really cool when I finally got the lenses cleared up. It was red and had stars surrounding it just like the thumbnail photo of my video of the eclipse. The moon constantly moved out of frame so I had to reposition both a hundred pound telescope and a camera on a table. 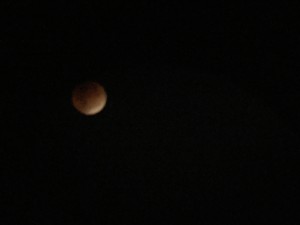 I then tried to use my IPhone to take a photo of the moon through my telescopes lens. That was so difficult because having to line the camera up with an opening smaller than a penny and then clicking the photo button  simultaneously was nearly impossible. It took two people and we still could not get a good photo. The best way is to use your video camera and zoom it in and take a photo of the digital screen.

I think that all this work paid off because I got the shot that had not been taken for over 3 decades. I decided to save you the haste and time by making my video only 5 minutes instead of 90…. Nobody would watch 90 minutes of a moon! Plus I just learned how rare these types of eclipses are, just by doing simple math!

Musician, writer, author, Video blogger, drummer
Aaron Hanania is an author, solo recording artist, and videographer. He plays both guitar and drums creating original music and lyrics and has published the dystopian fiction "The King's Pawn" (2018).

"My writings take the readers to the ends of their imagination and document news and feature events in sports and everyday life."

His first album is titled "Deep Space" and was released in October of 2019.